Melodic Intersect’s second Album brings together a host of world class musicians and builds on our experiences with our first album: Eastern Visions. Featuring the legendary Santoor maestro, Pandit Tarun Bhattacharya who has played in nearly every country in the world and is considered amongst the top 2 santoor players in the world. Tarun’s immense stature as a renowned classical artist as well as an artist who has crossed boundaries and played with such Western luminariessuch as Pandit Ravi Shankar and George Harrison of the Beatles brings a tremendous amount of musical direction to the group. He is joined by Hidayat Khan,sitarist and the son of the legendary Ustad Vilayat Khan. Hidayat’s training in classical music and his background working in Bollywood and Hollywood film scoring enables him to easily fuse the different genres of music easily. Greg Hatza is on the keyboards and is considered one of the eminent Jazz musicians today. Greg’s background in Jazz and his training in Indian classical music for over 20 years makes him a great fusion artist. His mastery is apparent in the various tracks. On the tabla is Enayet Hossain, a well established and known tabla player. Enayet’s background as an Indian tabla player who has accompanied all the great Indian classical musicians such as Ustad Vilayat Khan & Ustad Sultan Khan as well as haven played in the first album Eastern Visions makes him an asset to the recording. Hans Utter, a trained guitarist and classical Indian Sitar player brings forth his wealth of knowledge in all kinds of genres. He has done session work for many of the top Western Rock bands and world music bands across the globe. Lastly, Avirodh Sharma from Trinidad is a new talent on the rise. Equally versatile in Tabla and Percussion, Avirodh brings forth a wealth of knowledge and sensibility from Indian traditions and the Caribbean musical tradition. 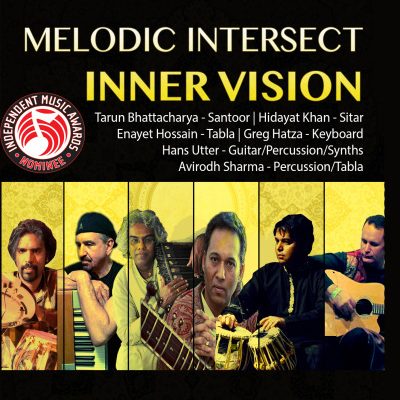